Beginnings and endings of life offer more than statistics. We are often faced with an experience that pulls us from our daily-ness and refocuses us.

Recently I recalled one of those events that took place over six years ago.

After my grandson was delivered prematurely, he seemed fine for the first 24 hours, then his little lungs couldn’t keep his oxygen levels up. He was taken to the Neonatal Intensive Care Unit (NICU). That night I contacted friends and relatives across the world to pray for him.

I had no idea how serious it had been until I was sitting by him several days later, watching five medical personal working furiously on another little boy. They lost him.

A nurse approached and nodded his way. “That was your grandson on Sunday night. We’d done everything we could, but nothing worked. We’d about given up when, for no reason, he turned the corner and pulled through.”

I told her about all the prayers. She shrugged. “Well, I don’t know much about that kind of thing, but he’s alive, and it’s for sure a miracle.”

Unable to touch him because his heart rate would soar, I had to spend my few minutes of visitation time just looking, and talking and praying. When I drove away from the hospital, blinded by tears, I had to pull over.

“Lord,” I gripped the steering wheel and cried. “We’re grateful that you saved him, but to start life in a plastic box, IV’s and monitors all over his tiny body, lights blinking, monitors beeping and alarms sounding, with the background of rock music from the radio – what a terrible first impression! And we can’t even touch him and comfort him.” I wiped away the tears. “Please, hold him while we can’t. And do something to block out those sounds.” Feeling more peaceful, I dried my eyes and drove on.

About six weeks later my daughter brought the kids to stay with us while she and her husband enjoyed the rare treat of a dinner out. Before she left, she warned me not to let the baby cry because it would drive his heart rate up.

When he grew sleepy, my grandson didn’t want to be put down, but wasn’t really happy being held, either. He began to fuss. I waltzed around the living and dining rooms, singing as I held him close, rubbing his back, and doing whatever I could to calm him.

Without even thinking about it, I switched to Spanish songs.  I started Pescador de Hombres, about Jesus after the resurrection, calling to Peter from the beach and looking into his eyes and smiling with love. 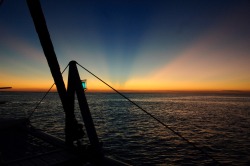 My grandson froze. Then he looked up at me, and I swear, it was as if he recognized the song! His whole body smiled. He exhaled and relaxed against me, in a deep, peaceful sleep.

As I continued to walk and hum the song, I “heard” a still, small voice say, “That was the song I was singing to him while I held him in the NICU.”

I still get chills remembering it.

My recent experience was with my youngest grandchild. During her first time alone with me she was tense and hadn’t made a sound for hours.  Even though she was exhausted she didn’t want me to put her down. I had to walk and sing. Finally, I sat to give her a bottle and asked her older sister to bring a book for me to read. She brought her children’s Bible.

From her questions about miracles I ended up telling her about her cousin in the NICU, and the song.  Of course, she asked me to sing it.

I was barely into the first verse when the little one shifted in my arms and looked at me with a “Why have you been waiting so long?” look. She started singing along, her whole body engaged. I kept singing, and she grew more and more animated, as if her life were tied to that song. When at last I became hoarse and stopped, she grew quiet again, but contented and relaxed.

Our good friend Hugo Pena, the retired Bishop of Honduras, used to tell us to work on our Spanish, because that is the language of heaven. Could he be right?

One thing is clear, there is so much more going on around and in us than our minds are aware of, than we can comprehend with our five senses or any amount of logic.

It is the Lord of Grace — Love surrounding us, holding us, calling to us when we’ve gone far away, singing into our spirits, breathing life into our bodies and souls.

I’m asking God for one thing,  only one thing:

To live with him in his house my whole life long.
I’ll contemplate his beauty; I’ll study at his feet.

That’s the only quiet, secure place in a noisy world,
The perfect getaway, far from the buzz of traffic.

7 thoughts on “A new focus”

This site uses Akismet to reduce spam. Learn how your comment data is processed.